Saint Joseph, Michigan – The music of Julie Andrews is sure to bring back fond memories, whether it is from her musical performances, Broadway shows or movies, and the Southwest Michigan Symphony Orchestra will bring that music to life at its concert on July 16, 2022.

With this concert, the SMSO takes the opportunity to welcome back its long-time music director and conductor Robin Fountain, who announced his retirement at the end of the 2019-2020 season. Because of the timing of the Covid pandemic and its resulting restrictions, Robin was not able to conduct his last concert with the symphony. This concert provides him the opportunity to conclude his tenure with the SMSO, as well as offers the community a chance to recognize him for the time he worked with the SMSO.

The concert, held at the Shadowland Pavilion at the Silver Beach County Park, will begin at 6:30 pm with the gates opening at 5:30 pm.

SMSO Music Director Matthew Aubin said that Maestro Fountain has collaborated with a lot of local talent over the years and after discussions with him, they both decided this would be a good concert for his return.

“I think normally when a conductor steps away, they would program a master work,” he said. “So definitely this is an opportunity as he was a part of the programmed summer work and has collaborated with local talent.”

“I’m excited to meet him in person and I’m eager to see how he presents a concert,” Aubin said.

The music for the My Favorite Things Concert is as follows:

Includes - I Could Have Danced all Night, On the Street Where You Live, and

Wouldn’t it be Loverly

Includes - Camelot, How to Handle a Woman, I Loved You Once in Silence, The Lusty

From Cinderella - the 1957 televised live performance

What: My Favorite Things

Celebrating the Music of Julie Andrews

Sponsors: The Symphony is only able to present events with the support of the community. While their support takes many forms, we are particularly grateful for our event sponsors: Edward J. Todd, Michigan Arts and Culture Council, and the National Endowment for the Arts.

Robin Fountain is Professor of Conducting at Vanderbilt University’s Blair School of Music. He is also in demand as a guest conductor, with recent engagements including concerts with the Singapore Symphony, the Tennessee Philharmonic, the Louisiana Philharmonic, and L’Orchestre Philharmonique Sainte Trinité (Haiti). He has recorded for Parma/Naxos, Novona and Blue Griffin records, most recently Michael Kurek’s Symphony No. 2 with the European Recording Orchestra, Sofia, Bulgaria. He recently concluded a fourteen-year tenure as Music Director of Southwest Michigan Symphony.

Under Professor Fountain’s leadership, the orchestra program at the Blair School of Music has a strong focus on ensemble skills, the development of which is the subject of his recent book “The Ensemble Musician,” co-written with Vanderbilt Wind Symphony conductor Thomas Verrier. He has won Vanderbilt’s Madison-Sarratt Award for Excellence in Undergraduate Teaching and the Blair School of Music’s Faculty Excellence Award. Educated at Oxford University, The Royal College of Music in London (where he studied with Norman Del Mar and Christopher Adey), and at Carnegie Mellon University, Robin Fountain was an Aspen Conducting Fellow. He was also privileged to have the opportunity to train with members of the famed Berlin Philharmonic at The Conductors Lab in Aix-en-Provence.

Together SMSO guest artists, lyric coloratura soprano Diane Penning and Chicago based singer, keyboardist, producer and conductor Paul Langford have entertained audiences with programs of popular music with symphony orchestras nationwide and in Canada. Whether from the pop charts, Hollywood or the ever popular “My Favorite Things” (incorporating favorite Broadway repertoire), their heartfelt vocals are heard in beautifully orchestrated

arrangements created by Paul. With a voice described as “clear, free flying and of exciting timbre”, Diane has appeared with over 30 orchestras in programs of both classical and pops repertoire. Venues and organizations include Chicago’s Orchestra Hall, Chicago’s Grant Park Music Festival, Kalamazoo Bach Festival, Phoenix, San Antonio, Greensboro NC, Grand Rapids, West Michigan, North Charleston Pops, Calgary CA, Elgin, Pensacola, Firelands, Ocean City Pops, Dubuque, Cheyenne symphonies and many others. Opera roles include Musetta in La Boheme, Frasquita in Carmen, Adele in Die Fledermaus, Donna Anna in Don Giovanni and Pamina, Papagena and Queen of the Night in The Magic Flute. Musical theatre roles include Cunegonde in Candide, Marian in The Music Man, Amalia in She Loves Me, Maria in a concert version of West Side Story, and the androgynous grouch in Robert Kapilow’s Green Eggs & Ham for seven consecutive years with the Grand Rapids Symphony. Recordings include Phantom Phantasy with pianist Rich Ridenour and the Grand Rapids Symphony, Christmas Festival with the Czek National Orchestra, Simply Gershwin with pianist Paul Bisaccia and Sacred Space with composer/performer Nicholas Palmer. Paul Langford has a career that spans 25 years. Paul’s arrangements have been performed all over the world by both instrumental and vocal groups including Chicagoland Pops, West Michigan, San Antonio and Pensacola Symphonies, Voices of Liberty, GLAD, multiple Disney Parks and many orchestras including Pensacola, Grand Rapids, La Crosse, Anderson, Dubuque, Jackson and West Michigan Symphonies.

Paul has been a vocal and piano guest artist in studio and live performance with headline and Grammy Award-winning artists David Foster, Yolanda Adams, Kenny Rogers, Heather Headley, Abraham Laboriel, Michael Bublé, Josh Groban and Celine Dion. His voice has been heard on radio and TV commercials for such companies as Ronald McDonald House, Oldsmobile, L.L. Bean, Old El Paso, Nintendo, Frigidaire and Nickelodeon. He has led and arranged for choirs, rhythm sections, big bands, orchestras and a cappella groups all across America and abroad. Paul is a published choral arranger and composer as well as an in-demand clinician for musical

groups of all varieties.

The Opera Grand Rapids Children’s Chorus has been an integral part of the company’s main-stage productions for over fifty years. Singers come from the greater West Michigan Community and represent some of the finest local musical talents. Recent appearances include the Puccini choruses of Tosca, La Boheme and Turandot as well as Mozart’s Die Zauberflote. They are directed by Carrie Ledet. 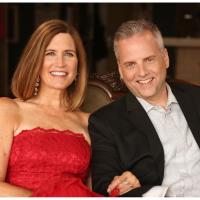