The search for a new music director began in 2019 following the announcement that then Music Director Robin Fountain would be retiring at the end of the 2019-2020 season.

Dr. Aubin, of Jackson, MI, comes to the SMSO with an extensive background and is excited to begin working with the organization.

Originally from Norwich Conn., he and his wife, Michelle, an orthopedic surgeon, are the parents to 4-year-old daughter Juliette.

A leader in the 21st century orchestral landscape, Dr. Aubin, reaches new audiences through innovative performance formats and creative initiatives both on and off the podium.

While the board, musicians and staff at the SMSO as well as its patrons and members of the community are excited to experience the programming and plans Dr. Aubin has in store, he said he doesn’t have any preconceived plan.

“In the first year, I want to learn, create exciting programming and make myself available in the community as an advocate for the organization,” he said. “I want to offer myself as a resource; I will spend time in St. Joseph. There is a lot of planning to do, learning about the organization and meeting people. Ideas will spark and together, we will develop new initiatives.”

There are many activities at the SMSO already planned and much more to come as Dr. Aubin begins his tenure as music director.

“Aside from the outstanding artistic talents we saw on display during his two performances last season, Matthew brings a personal dynamic to the position that appeals to the staff, musicians and audience alike,” said SMSO Board President Bill Downey. “Living in Michigan, Matthew certainly understands what it means to transform a local community through power of music and we’re looking forward to the impact he will make on our efforts here in Michigan’s Great Southwest.”

The entire selection process was longer and more difficult for both the music director finalists as well as the SMSO due to the pandemic. Aubin said the unknowns of the performances with the pandemic are what became the most difficult during the entire process.

“Plans had to change with Covid,” he said. “The pops and classical programs planned had to be adjusted because of restrictions. It takes a lot of time to plan programs.”

He said that the SMSO did an exemplary job in pivoting and doing its best to adjust based on restrictions that were continually in flux.

“A lot of orchestras had to figure out the types of programming and things that could be safely done to support the musicians during the pandemic. I think all of this made (then executive director) Sue’s (Kellogg) job trickier without a music director.”

Currently, he is in his 5th season as Music Director of the Jackson Symphony Orchestra, and also serves as Artistic Director for The Chelsea Symphony in New York City. In these roles he has led highly visible collaborations with partners such as actor John Lithgow, the award-winning television series Mozart in the Jungle, and the American Museum of Natural History in New York City. Dr. Aubin has played a principal role in the initiation and development of The Chelsea Symphony’s annual competition for emerging composers with high profile adjudicators such as Conductor Laureate of the Seattle Symphony and Music Director of the All-Star Orchestra, Gerard Schwarz. Dr. Aubin has led TCS in their Lincoln Center debut and conducted the New York City premieres of works by Mark O’Connor, Fazil Say and Caroline Shaw, among others.

As a consultant for the Amazon Prime series Mozart in the Jungle created by Roman Coppola and Jason Schwartzman, Dr. Aubin was the off-camera conductor for an episode filmed on Rikers Island. Since then, Dr. Aubin has continued a relationship with the NYC Department of Correction, designing and conducting a series of concerts and education initiatives for detainees, both in person and online. He also served as the onstage conductor for the film Bel Canto with Julianne Moore and has been an artistic consultant for the hit television show Younger.

In his role as Music Director of the Jackson Symphony Orchestra, Dr. Aubin has transformed the orchestra’s visibility, both in the community and on a national scale. He has collaborated with world-renowned soloists such as pianist Pascal Rogé, cellist and composer Jeremy Crosmer, cellist Julian Schwarz, and composer Lowell Liebermann. During Dr. Aubin’s time as Music Director, the JSO’s season has expanded, and the organization is now regularly reaching audiences of all ages through expanded family concerts, education concerts, and the JSO’s Music on Tap series geared towards young adults.

“One of the exciting things in working with the SMSO is the level of playing: we have really strong professional musicians,” he added.

Dr. Aubin said that the Southwest Michigan Symphony Orchestra is a special organization for a small community

“Coming from a small community, I see the Jackson Symphony Orchestra is regarded as a source of pride and I see St. Joseph is similar,” he said. “Professional arts organizations can have a big impact, but you don’t always realize what you have in your own backyard.”

Initially, Dr. Aubin said there will be a lot of grassroots efforts as far as getting to know the community and what the wants and needs are.

“Once people meet me, it will be easier to garner support for the SMSO. Then it will become a snowball effect,” the new music director said. “The trick is triggering that. For me, I want to start by meeting people, foundations, businesses and learn what they want from us and craft my vision with community input.” 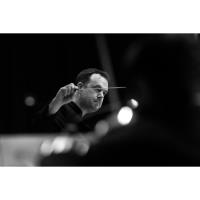