November 02, 2022
Press ReleaseCommunity
ST. JOSEPH, MI. - Bryan Lubeck returns to the southwest Michigan stage with a fresh blend of holiday sounds during a special Christmas concert at The Box Factory for the Arts, 1101 Broad Street, St. Joseph, on Saturday, Dec. 10, at 7 p.m. Reserved cabaret seating is $25. General admission tickets are $20 in advance and $25 at the door. Tickets are available at ticketstripe.com/bryanlubeck.

“This will be a unique opportunity for audience members to hear not-yet-released music that I have been working on including some holiday favorites as well as new, original material that will be part of the new album, Welcome Winter, coming out next year,” Lubeck said.

Lubeck will also perform selections from his recent Amazon #1 Best Selling album release Midnight Sun as well as a few favorites from his first holiday album We Three Strings. He will be joined by his touring band that includes Nick Bisesi on saxophone who is one of Ramsey Lewis’ “Urban Knights.” In between songs, the audience can expect conversation and storytelling from Lubeck that conveys the emotion and energy of the season.

The concert marks Lubeck’s return to the place where his professional performance career began.

“My first instrumental concert was at The Box Factory for the Arts and that is what helped to launch the recording and touring career I have today. I’m looking forward to being back on that stage in the intimate surroundings The Box Factory offers,” stated Lubeck.

Known for his fusion of romantic Spanish guitar and urban grooves, Lubeck has been a staple of contemporary pop and jazz instrumental radio for more than a decade. When he collaborated with Billboard Top 10 artist Johannes Linstead on the holiday CD, We Three Strings, legendary Smooth Jazz radio programmer Rick O’Dell of Chicago's WNUA ranked it as one of the top 10 holiday CDs of all time, in any genre.

The enduring timelessness of that album is evidenced by the fact that four songs from the album continue to receive significant time in radio rotation every holiday season. Bryan’s catalog, though, spans well beyond the sounds of the season. An editor with Billboard Magazine once said that Lubeck weaves a tapestry of fiery Spanish guitar and cool urban grooves into exhilarating and romantic live shows and recordings. The striking and sensitive ballads coupled with the exciting catchy flamenco styles from his CDs have proved to a new generation of music lovers that the contemporary elegance of Spanish guitar is more powerful today than ever before when combined with the grooves of his Latin and urban band. 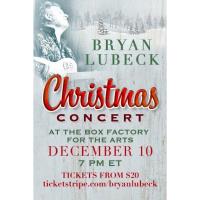