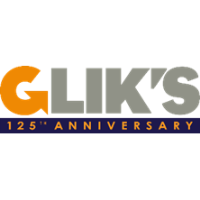 Here’s a link to several historical photos of the Glik’s family and business over the years. Feel free to download any of them.

In 1897, Joseph grew his horse-drawn cart selling business by opening his first Menswear store on North Broadway in St. Louis, Missouri. He was able to do this through his persistent belief in aggressive marketing, savvy buying and personal service. This philosophy paid off in 1902, when Joseph took a risk by expanding into the fast-growing industrial town of Madison, Illinois. His son, Morris Glik joined the company at this time, running the Madison location. The risk paid off, and in 1925, the Glik’s Madison store had become one of the area’s largest department stores at over 1,000 square feet.

The postwar era brought new challenges. Elsie, Morris’ wife, suddenly found herself in charge of an entire business she had never planned to run after Morris’ sudden passing in 1945. For several years she continued to run the business while their son, Joe, was deployed with the Navy during the end of World War II.

Once Joe had returned, he continued the family legacy of savvy buying. The strip mall was a brand-new concept, one Joe saw the potential of, and decided to pursue. In 1954, he opened the first Glik’s location in a strip mall in Granite City, Illinois.

The Granite City location was a Junior Department Store and became an instant success because of its easy automobile accessibility. The Glik family saw this for what it was, a foretelling of what suburban clothing stores could offer. They realized the niche Glik’s could offer people – a store bigger than a specialty store, but more personal than a national chain. A niche the company happily continues to occupy today.

In the 1970s, Glik’s grew to a chain of stores, all located in strip mall centers through the Metro East area of St. Louis, Missouri. This growth has continued under 4th generation Glik brothers, Jeff and Jim’s leadership, who added over 60 stores in the Midwest as well as an online store. Glik’s now has a home in Missouri, Illinois, Indiana, Michigan, Wisconsin, Minnesota, Iowa, South Dakota, North Dakota, Kansas and Nebraska.

In 2020 Glik’s was happy to welcome the next leaders to the company, cousins and 5th generation family members, Jeremy and Elliot Glik. As Glik’s looks to the future, we are sure their passion and dedication will impact the company as every leadership change has here: with positive results and commitment to a positive impact for our vendors, customers and employees.